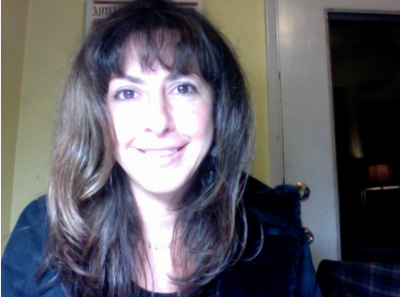 Bipolar disorder, postpartum depression and postpartum psychosis have recently made media headlines. Katie Holmes stars as a love-struck poet with bipolar disorder in the film Touched With Fire. The British hit television show EastEnders featured a postpartum psychosis storyline that gained national attention. Last January in a landmark decision, the U.S. Preventative Task Force called for screening for depression during and after pregnancy.

When I was pregnant, my obstetrician didn’t question me about my mental health or my family’s mental health history. My father had bipolar disorder, but before and during my pregnancy I didn’t show any signs of mental illness.

When I went into labor, my life changed overnight.

We went to the hospital and I stayed up all night in pain. When my daughter Marilla was born the next day, I became hypomanic. I was exuberant and talkative (both signs of hypomania), but I appeared relatively normal. My baby attracted most of the attention, and no one noticed that I was in trouble. Exhausted, I sensed something was off, but I kept my fearful feelings inside. Within forty-eight hours I had hypergraphia, a rare condition in which one compulsively writes. I wrote at every opportunity, even during breastfeeding, when I should’ve been resting and focusing on my baby. I could barely sleep as my mania escalated, and poor Marilla didn’t gain enough weight because I didn’t breastfeed her sufficiently.

A month postpartum, I knew I was manic; after all, I had witnessed mania in my Dad. I frantically searched the internet about postpartum mania, but my search only yielded postpartum psychosis statistics. During Marilla’s six-week checkup, her observant pediatrician heard my racing voice and pressurized speech (symptoms of bipolar) and blurted out “Dyane, I think you’re manic!”

I burst into tears. While I felt ashamed, I was relieved that he realized what was happening. It was clear I needed hospitalization, but leaving my newborn was agonizing. I admitted myself into a hospital’s psychiatric unit where I was diagnosed with postpartum bipolar disorder.

After years of hospitalizations, medication trials, and electroconvulsive (ECT) therapy, I’m stable and doing well. While bipolar disorder ravages many relationships, my husband and I have stayed together, in part, thanks to the guidance of counselors and psychiatrists. Life will always be a challenge, but my two daughters inspire me to take care of myself.

“The risk of developing new-onset severe mental illness is higher in early post-childbirth period than any other time in women’s life. Family history, pre-existing mental health conditions, traumatic birth experience and sleep deprivation could be potential risk factors. Bipolar illness can present for the first time during this period. Accurate diagnosis is the key to the recovery.”

“Many women I’ve worked with had been previously misdiagnosed with postpartum depression. I always make a point of discussing this during my presentations. In addition, postpartum bipolar disorder deserves its own category separate from postpartum psychosis.”

Mental health screening during pregnancy would be of immense value to every mom. Women with a family history of bipolar disorder could be observed postpartum, and if symptoms manifested they’d be treated immediately. It’s imperative that doctors and other caregivers assess women not only for postpartum depression but also bipolar symptoms.

Everyone who lives with a stigmatized illness deserves a chance to find support and empathy from others who understand her experience. Through connecting with those who can relate to our mood disorder, we may not find a magic cure, but virtual support can be profoundly helpful. Postpartum Support International recently created online support groups in English and Spanish led by trained facilitators, while the Postpartum Progress website offers moms a private forum to interact with one another. I’ve never personally met another mom who has postpartum bipolar and I yearn to do so. If you or someone you know is or might be suffering with postpartum bipolar disorder please reach out — I’d love to hear from you!

Dyane Leshin-Harwood holds a B.A. in English and American Literature from the University of California at Santa Cruz. A freelance writer for over two decades, she has interviewed luminaries including Madeleine L’Engle, Dr. Kay Redfield Jamison and SARK. Dyane was diagnosed with postpartum bipolar disorder (bipolar, peripartum onset) in 2007. Dyane was selected as an International Bipolar Foundation Story of Hope and Recovery, and a PsychCentral Mental Health Hero.

She’s raising her daughters Avolea and Marilla with her husband Craig and serves as women’s postpartum mental health advocate. Dyane founded the Santa Cruz, California chapter of the Depression and Bipolar Support Alliance (DBSA) and facilitates free support groups for moms with mood disorders. She’s a member of the International Society for Bipolar Disorders and Postpartum Support International. Dyane’s memoir Birth of a New Brain – Healing from Postpartum Bipolar Disorder will be published by Post Hill Press in 2017. Dyane is a Huffington Post blogger. Visit Dyane’s blog Birth of a New Brain  and find her on Twitter: @birthofnewbrain

Thank you, Dyane, for sharing your amazing story and using your experience to help countless women. You are awesome!