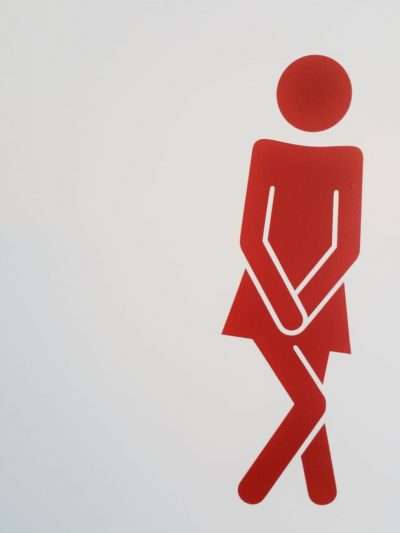 Photo attribution: Woman in red has to pee

This week on MD for Moms, I interview urologist Dr. Melanie Crites-Bachert about urinary incontinence and other pelvic floor related issues that occur frequently for women, especially moms. One of the sneaky secrets of new motherhood is that after delivering a baby, you may pee when you laugh or when you jump, or run or cough… the list sometimes can feel endless. Urinary incontinence is not something anyone really bargains for, and the classic precautionary suggestion of Kegels rarely if ever is effective.

Rather than feeling embarrassed or alone, it’s imperative that women appreciate how common urinary incontinence is and, most importantly, that there are treatment options to alleviate their distress. Dr. Crites-Bachert discusses the reasons for urinary incontinence, signs you will benefit from treatment as well as effective ways to remedy the problem. We also explore some other relatively common pelvic floor concerns some women experience after childbirth such as uterovaginal prolapse and various forms of fistulas. Rather than suffer, learn about treatment options with Dr. Crites-Bachert on this week’s episode of MD for Moms.

Dr. Melanie Crites-Bachert received her medical degree from the West Virginia School of Osteopathic Medicine in 2003 and completed residency in Urologic surgery at University of Medicine and Dentistry New Jersey in 2009. She then went on to receive additional fellowship training to sub-specialize in Female Pelvic Medicine, Voiding Dysfunction, and Pelvic Reconstructive Surgery (FPMRS) from the Cleveland Clinic Florida. Dr. Crites-Bachert is considered an expert at treating urinary incontinence with Interstim therapy, and she was named Oregon’s premier implanter of the Interstim device as she performs more Interstim therapy procedures for urinary/fecal incontinence than any practitioner in Oregon. Her success rate with Interstim therapy approaches 92%, and she became a nationally recognized consultant and proctor for Interstim therapy as a result. Her research and implant protocol has established national precedent for the successful implantation of the device. Additionally, Dr. Crites-Bachert is a national consultant and proctor for the treatment of pelvic organ prolapse. She is highly trained to perform pelvic organ prolapse surgery with and without mesh, and she is very skilled at treating complications from previous mesh surgeries. Her skills and successful treatment of pelvic organ prolapse have established her as a national research practitioner.

She remains active in research, and her work has been presented on both the national and international levels. Her research results are also featured in educational training books for surgeons. Dr. Crites-Bachert believes in teaching, and also remains active in teaching resident and student physicians.

She serves as part of the Medical Executive Committee as Surgical Chair for a leading hospital system in the Greater Portland area, and her leadership has helped to set surgical precedent within that hospital system.

Dr. Crites-Bachert believes strongly in patient empowerment and confidence building.  To this end, she has an elaborate set of patient focused videos (http://360phi.com/videos.html) and on YouTube (https://www.youtube.com/user/center4menswomensuro).