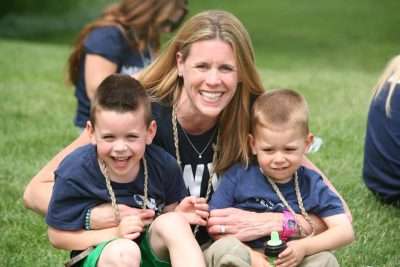 This week on MD for Moms, I’ll be interviewing Carolyn Dorfman, co-director with her husband, Jed, of Camp Walt Whitman, about sleep away camp. Choosing the right camp for your child is a big decision, but do you know what to look for? Carolyn will tell us signs of a good camp and if a camp is a likely fit for your child. We will also explore how to assess when your child is ready for camp, and when to consider waiting. Plus, don’t miss some secrets about camp only a camp director would know. Camp Walt Whitman is one of the absolute best camps in the country, and we are going to learn directly from the source what it takes to give your child the summer of a lifetime.

Carolyn Dorfman joined her husband as Director of Camp Walt Whitman in September 2006.

Prior to becoming a director, Carolyn worked as the Executive Director of the National Law Enforcement and Firefighters Children’s Foundation in New York City. Carolyn spent seven years in Knoxville, Tennessee first graduating with a Masters Degree in Sports Management from the University of Tennessee and then working as Assistant Athletic Director for the Women’s Athletic Department. Carolyn played four years of collegiate basketball at Dalhousie University where she graduated with a degree in Recreational Management.

Carolyn’s prior camp experience includes working as the Director of Glencoe Day Camp and many summers coaching at basketball and volleyball camps throughout the US and Canada.

Carolyn and Jed are joined each summer at camp by their three children, who have been able to experience the magic of Walt Whitman every summer of their lives.