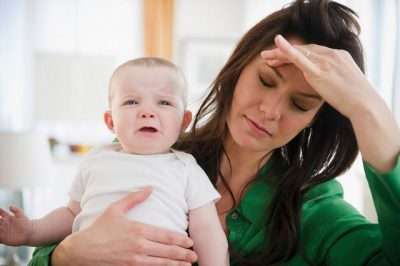 This article was originally published on mbg health on December 12, 2017 as 5 Common Myths About The Mental Health Of New Moms

As postpartum mood disorders are increasingly discussed rather than stigmatized, and high-profile celebrities are speaking out about their struggles, our society is beginning to understand how common mood symptoms appear during and after pregnancy. This has helped pave the way for more women to feel comfortable being honest about their less-than-rosy experiences with pregnancy and new motherhood.

In fact, 15 to 20 percent of women suffer from a perinatal mood and anxiety disorder (PMAD). Consider the enormity of that number: One of every five to seven moms sitting at lunch or in a meeting or a dinner party has, or is still struggling with, a mood disorder during and/or after pregnancy.

Despite a newfangled awareness, there remains a lot of inaccurate information and misconceptions surrounding depression and anxiety during and after pregnancy. Let’s discuss the top five thing many women get wrong about antepartum (during pregnancy) and postpartum illness:

1. Taking medicine in pregnancy is dangerous for the baby.

Pregnancy is a truly awesome time, filled with expected and normal worries, big bodily changes, and emotional reflection. It’s also a time of wonder and excitement, planning, and anticipation. All women deserve the opportunity to enjoy the beauty of pregnancy, but untreated moderate to severe anxiety and/or depression can rob her of this joy. Expert treatment allows a woman to have a full experience, with the natural emotional highs and lows without the excessive fear or sadness on her journey to motherhood.

Untreated illness can have serious negative consequences to mom and to her unborn baby, including but not limited to increased risks of hypertension, gestational diabetes, preterm labor, smaller than expected babies, and complicated deliveries such as C-sections. Babies exposed in utero to untreated illness may have greater difficulty sleeping consistently and have an increased chance of behavioral issues in young childhood.

If a woman is experiencing moderate to severe mood symptoms in pregnancy and has tried psychotherapy and making positive lifestyle changes such as prioritizing sleep, exercising, and eating healthy foods, she should discuss the option of adding a medication to reduce overall risk in pregnancy.

2. My symptoms are going to self-resolve after my baby is born.

One out of every three women who suffer from postpartum depression experienced depression (or anxiety) during pregnancy. Having a baby does not treat or cure any symptoms of depression and/or severe anxiety that a mom experienced while pregnant.

3. I am on an antidepressant or anti-anxiety medicine, so I can’t breastfeed.

Women who are on an SSRI can breastfeed if they choose to. The amount of medication that gets through into breast milk is very low relative to mom’s dose. The relative infant dose (RID) is the amount of medication that gets into breast milk relative to mom’s dose; if the RID is less than 10 percent, then the medication is considered safe. The RID of all SSRIs is less than 10 percent, and there have never been negative outcomes as a result of exposure to an SSRI through breastmilk.

4. Having postpartum depression or anxiety is purely hormone-related.

Estrogen and progesterone levels peak at roughly 100 times their baseline levels just before delivery and then drop like a ton of bricks in the first several days postpartum. This acute drop in hormone levels is often the cause of the “baby blues,” or the tearfulness and sometimes irritability that occurs for up to 80 percent or more of new moms. The baby blues, by definition, self-resolve within two weeks or so. Development of a more severe, persistent mood disorder is often due to a combination of factors, all of which have not yet been fully identified. History of depression or anxiety, financial stressors, sleep deprivation, social isolation, feeling overwhelmed by the responsibilities of new parenthood, and many more changes after having a baby are more likely to contribute to a woman’s chance of developing postpartum depression or anxiety.

One in four to one in 10 men experience postpartum depression symptoms and up to half of men whose partners are depressed will similarly experience symptoms after the birth of a child. Just like new moms, new dads suffering from depression and/or anxiety require treatment to improve their mood and to enjoy new parenthood.